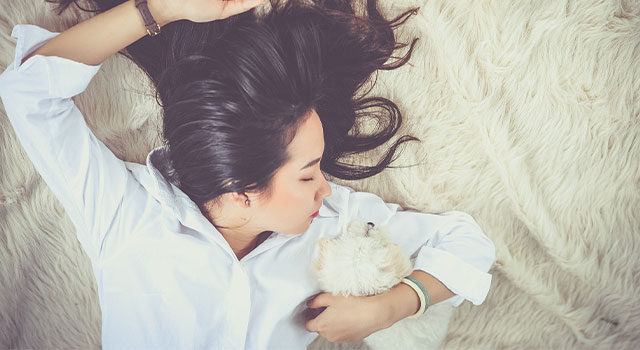 A recent comprehensive sleep study on people with post-concussion syndrome showed that 78% were diagnosed with sleep apnea.

What came first: the concussion or sleep apnea? Determining the answer can be difficult. People who don’t get enough sleep already exhibit some of the symptoms of post-concussion syndrome even when they haven’t had one.

What we do know is that there is a connection between sleep apnea and concussion. Sleep apnea affects the recovery from a concussion, and at the same time, the condition may result from a traumatic brain injury (TBI).

Where does vision come in?

For those having sustained a concussion, sleep is very important for a speedy and thorough recovery. A poor night’s sleep, as in the case of sleep apnea, may lead to impaired decision-making, cognitive loss, and symptoms of depression—all of which can interrupt the recovery process.

Obstructive sleep apnea, the most common form of sleep apnea, is caused by a physical collapse or blockage of the upper airway that interrupts breathing during sleep. This also reduces blood and oxygen flow to the brain, making it difficult for those with a concussion to recover.

A lesser known type of apnea is central sleep apnea. Unlike obstructive sleep apnea, this type is caused by a dysfunction in the brain that regulates breathing and sleep, which could also be affected by a TBI.

As we all know, getting a good night’s sleep is essential to good health. There are a number of eye conditions that are exacerbated by poor sleep patterns and therefore may be associated with sleep apnea.

Getting your eyes checked regularly is important as it allows your eye doctor to rule out any eye disorders and prevent potential vision loss. This is all the more important if you’ve been diagnosed with sleep apnea.

Concussions can have a significant impact on the functioning of the visual system. Post-trauma vision syndrome is a group of symptoms that cause eye coordination problems, dizziness, and blurred vision after a concussion.

The symptoms of post-trauma vision syndrome can include:

How a Neuro-Optometrist Can Help

Neuro-optometrists can help post-TBI patients in ways that other health care providers may not be able to.

Neuro-optometry deals with how the visual system impacts daily functioning. By training the brain to control and communicate with the eyes more effectively, symptoms like headaches and dizziness can be significantly reduced or disappear altogether.

If you have experienced a concussion or suspect you may have sleep apnea, contact Silicon Valley Eye Physicians to follow up on a diagnosis and treatment for any vision problems you may be having due to either condition.

Q: What’s the connection between sleep apnea, concussion, and your vision?

Q: Is there a way to treat vision problems due to a concussion?

Did you know that some eye conditions are associated with sleep apnea? According to the National Sleep Foundation, more than 18 million Americans have sleep apnea, and Health Canada reports similar prevalence. It’s a sleep disorder where people stop breathing — often multiple times per night — while sleeping.

If you have sleep apnea: it tends to take longer for your tears to be replenished, you’re more likely to have ocular irritation, you have a higher chance of developing floppy eyelids, and you’re at increased risk for glaucoma.

What Is Obstructive Sleep Apnea?

There are different types of sleep apnea. The most common one is obstructive sleep apnea (OSA). During OSA, your airway becomes partially blocked due to relaxed muscles in your nose and throat. This causes apnea (the absence of breathing) or hypopnea (abnormally shallow, slow breathing). It’s twice as common in men, and is more likely to affect people with obesity, hypertension, diabetes or heart disease.

What are the common symptoms of sleep apnea?

Sleep apnea occurs when the muscles in the back of your throat relax too much to allow normal breathing. These temporary breathing lapses cause lower-quality sleep and affect the body’s oxygen supply, which can lead to potentially serious health consequences.

While snoring is a common symptom, not everyone who snores has sleep apnea. Interrupted sleep can cause excessive daytime sleepiness, fatigue, irritability or depression, headaches in the morning, difficulty concentrating and thinking, and a sore throat.

Which Eye Conditions Are Associated With Sleep Apnea?

Glaucoma occurs when increased pressure within the eye damages the optic nerve, which connects the eye to the brain, leading to vision loss and sometimes blindness. In some cases, it might be due to a drop in blood oxygen levels, which happens when you stop breathing. However, CPAP machines, one of the most common treatments for sleep apnea, can also cause glaucoma.

So, people with sleep apnea — even if it’s being treated — need to get their eyes checked on a regular basis for glaucoma.

Floppy Eyelid Syndrome (FES) is an eye condition where a person has an unusually large and floppy upper eyelid. It can cause eye redness, irritation, discharge, or blurry vision — and over 90% of people with FES also have sleep apnea.

Non-arteritic anterior ischemic optic neuropathy (NAION) is an eye condition that occurs when there is a loss of blood flow to the optic nerve. Patients typically complain of significant vision loss in one eye without any major pain. Approximately 70-80% of patients with NAION have been found to have OSA.

Also referred to as an ‘eye stroke,’ retinal vein occlusion (RVO) is a blockage of the small veins that carry blood away from the retina. A recent study of 114 RVO patients found that sleep apnea was suspected in 74% of the patients that had previously been diagnosed with RVO.

Some other ocular conditions that are more common in patients with sleep apnea include: papilledema, keratoconus, and central serous chorioretinopathy. Furthermore, in addition to glaucoma mentioned above, CPAP machines are associated with dry eye syndrome and bacterial conjunctivitis.

Talk To Your Doc

Get eye exams regularly to rule out eye disorders and prevent potential vision loss, especially if you have been diagnosed with sleep apnea. At Silicon Valley Eye Physicians in Sunnyvale we encourage you to share your medical history with us so we can better diagnose and treat any eye conditions or ocular diseases you may have, and help you keep your eyes nice and healthy.

Q: What are the Warning Signs of Sleep Apnea?